About Our School
Catholic Central High School (CCH) has been located in the heart of downtown London since 1950. We are built upon traditions – traditions of excellence. As CCH approaches its 70th anniversary in 2020, the flagship high school of the London District Catholic School Board continues its tradition of faith based education with strong academic, fine arts, athletic and extracurricular programs.
Our central location allows students from all across London and Elgin, Middlesex and Oxford Counties to take advantage of the enriching learning opportunities and academic challenges provided through many special programs such as International Baccalaureate (IB), English as a Second Language (ESL), our Specialist High Skills Majors (SHSM) and Music Extension.
Often, the Football Program and the Music Program are identified as synonymous with CCH. These programs have certainly brought Catholic Central considerable recognition and fame. Crusader Football and Kennedy Field have earned a strong positive reputation over the years. CCH Concert Choir and String Orchestra have received international recognition. The International Baccalaureate Diploma Program creates an additional title for CCH as an I.B. World School and provides students with a unique academic and global challenge.
Catholic Central has a dedicated staff that provides many opportunities for students to develop their God given gifts, expand their leadership skills and recognize the importance of being responsible citizens who give witness to Catholic social teaching. Student groups such as the Student Council, Crusaders in Action, the Peer Helpers, Student Chaplaincy, and Best Buddies provide students with opportunities to get involved in positive role modeling, discussion and action about social justice issues and community services.
Graduates of Catholic Central have become influential leaders in the arts, business, industry, sciences and the religious and local communities. Catholic Central is known for its school spirit. Whether it is a sporting event, a fundraising activity or helping others in need, CCH students have always joined together in support of a cause.
Our school is also enriched by its diversity. With more than thirty nationalities in its make-up, the CCH student body is a rich mixture of students and cultural influences from around the world.
Tradition, academic excellence, school spirit, extra-curricular activities, community involvement and diversity all combine to make Catholic Central well suited to the goals of Catholic Education.
School History
Catholic Central High School was established in September 1950 through the efforts of the Sisters of St. Joseph with the support from the Diocese of London and the Oblate Fathers. The cornerstone was laid in December of 1951 and the school was officially opened September 14, 1952. In the fall of 1958 the construction of the east wing began and was first used by students in September of 1959. Due to an increase in student population, a total of 14 portables were added between 1970 and 1972. The north wing which accommodates the Fine Arts & Family Studies programs was constructed in 1986.
In 1997 and 1998, a massive renovation was begun. This renovation included the complete renovation of both the east and west wings as well as an addition which unified both wings and added a new chapel, atrium, library, technology wing, new computer and science labs, gymnasiums, cafeteria and administration, guidance and office area. A blessing and re-dedication of the school was held in October of 2000.
The Catholic Central School Community is a diverse community which include core area families as well as families from across the greater London area for speciality programs.
Mission Statements
Special Programs
Specialist High Skills Majors - programs offered to CCH Students
Visit Programs & Services to learn more about each of our specialty programs.
Transportation
Over 75% of our students are registered as school bus riders. Students living more than 3.2 kilometres from the school, and living within the school boundary, are eligible for Board-sponsored bussing. Visit www.mybigyellowbus.ca for more information.
Safe Schools
Catholic Central High school has a uniform policy, and a strict Code of Conduct. The school also has Commissionaires, in addition to two Vice-Principals. Supports for CCH’s strong commitment to nurturing and maintaining a safe school community include a CrimeStopper’s program, Safe Schools Committee, a suspension program aimed at deterrence, part-time Nurse and Social Worker assignments, and three Guidance Counselors.
School Prayer
Loving God
Through these halls, we walk with you.
Grant us the grace to find your light within us.
We stand before you –
The past, present and future of Catholic Central.
Teach us goodness – to embrace diversity.
Teach us discipline – that we may walk in your love.
Teach us knowledge – to live and to learn.
Blessed Mary, Patron of CCH,
guide us that we may follow your example –
To choose love over hate,
Good over evil,
Excellence over mediocrity.
Lord – watch over us and be with us
on our crusade to deepen our faith.
Amen
Catholic Graduate Expectations 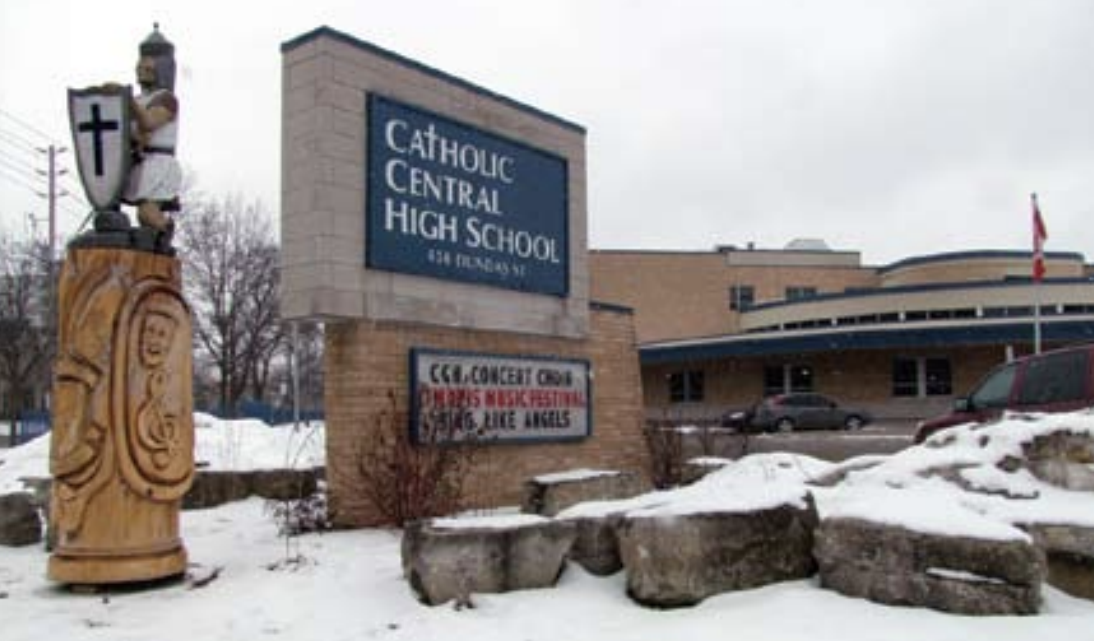